Looking for a last minute getaway? Take a look at our late availability across our self-catered parks to escape the four walls you’re used to and enjoy a change of scenery.

About 45 minutes from park 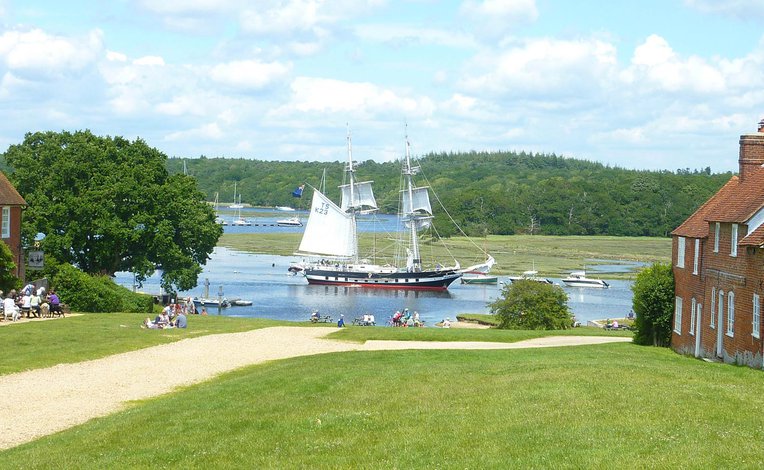 Nestled on the banks of the Beaulieu River, the idyllic hamlet of Buckler’s Hard has remained unspoilt over the decades. With picturesque Georgian architecture, quaint cottages, and a New Forest backdrop, it’s a beautiful, relaxing place to go for a day trip during your visit to the area. During WWII, Buckler’s Hard became well known as a motor torpedo base and in 1963 the Buckler’s Hard Maritime Museum opened to serve as a memorial to those lost in the war. These days, Buckler’s Hard is still very much a quintessential British hamlet, with a variety of things to do for the whole family.

Buckler’s Hard pubs and eateries
Buckler’s Hard may be small, but that doesn’t mean you’ll be stuck for somewhere to eat and drink. The hamlet is known throughout the region for its charming eateries, pop into Captain’s Cabin Tea Rooms for a bite to eat and a hot drink. Or if you have a hankering for something stronger, head over to The Yachtman’s Bar and Garden at The Master Builder’s House Hotel for a wide selection of beers, wines and spirits. Dreaming of a romantic dinner with a view? Book a table at the River View Restaurant and enjoy a fine dining experience in the heart of the forest, overlooking the beautiful Beaulieu River.

Buckler’s Hard Museum
Back in the 18th century, Buckler’s Hard was founded as a port for importing sugar, and since then has flourished into a fascinating village, based around the river. Discover more about the watery history of Buckler’s Hard by visiting the hamlet’s ever-popular Maritime museum, and learn all about the ships, buildings, and people that are part of its history.

Buckler’s Hard River Cruise Set sail along the glorious Beaulieu River for an experience you’ll never forget. Formerly known as the River Exe, the Beaulieu River is tranquil haven of natural scenery and wildlife, flowing 12 miles through the New Forest. Hop on the Buckler’s Hard River Cruise to see this privately-owned river in all its glory, plus learn about all the fascinating local wildlife that frequents its banks. Buckler’s Hard river cruises typically operate daily from April to September.

How to get to Buckler's Hard

By car: Even though it’s located in the heart of the New Forest, Buckler’s Hard is easy enough to get to. From the M27, exit at junction 2 and follow the signs towards Beaulieu Village, then follow the brown signs to Buckler’s Head. Post code for Sat Nav users: SO42 7XB. By train: the closest train station to Buckler’s Head is Brockenhurst. From there it’s a short taxi ride to the hamlet.